Edit
This article is classified as a medium quality article. Therefore, the three Tallest declare that it is one of the decent articles of the wiki, but could be made better. Please try to expand it and add further content such as links, pictures, videos, quotes, etc. 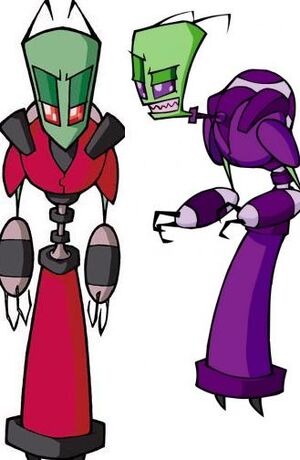 The Almighty Tallest is the leader (or leaders) of the Irken Empire. As the name suggests, he or she is the tallest known Irken alive and has virtually absolute power, save for the Control Brains.

The Irken Empire has a hierarchical class structure in which shorter individuals are both figuratively and literally looked down upon. The tallest Irken born in a specific generation takes command of the Empire. However, in the event that two Irkens are exactly the same height, they will rule simultaneously, such as in the case of Red and Purple. It is never conclusively explained how an Irken grows tall to be named ruler.

Despite their apparent omnipotence, the Almighty Tallest are actually little more than figureheads introduced to give the Irken populace something to idolize in their society; the Control Brains have all of the true power and influence over the citizens, and even the "Almighty" Tallest must submit to their decisions. The proper honorific in addressing the Almighty Tallest respectfully is "My Tallest", the equivalent of "Your Majesty/Majesties" (or, more appropriately, "Your Highness") on Earth.

Presently, the two current Almighty Tallest, Red and Purple, travel around to observe and supervise Operation Impending Doom II in The Massive, the largest and most powerful ship in the Irken Armada, as well as Red and Purple's personal vessel. While they are interested in expanding the Irken Empire, they mostly spend their time lounging around and stuffing their faces with snacks and junk food. It is unknown if the past Almighty Tallest were lazy as well.

On an Irken holiday known as Probing Day, the Almighty Tallest check up on all the Irken Invaders and ask them to do a presentation on how they plan to conquer their assigned planet. However, Red and Purple force the Invaders to do a puppet show on how they're going to conquer the planet instead, rather than a presentation. If they are not entertained, or if the Irken flat-out refuses to do the puppet show, the Invader is pummeled senselessly by mechanized mallets controlled by the Almighty Tallest.

Despite being of the same species as their subjects, the Almighty Tallest differ from their subordinates in many ways other than height: they appear to only have two fingers (as opposed to the normal Irken amount of three or four), and their waists are unnaturally thin. Explaining the former, it was stated by the Invader Zim crew that when a Tallest is chosen, their thumbs are usually chopped off in order to prove that they can rule without them. As for the waists, it is possible that the seemingly impossible effect was achieved by an extreme form of corsets, which, while impossible to do with a human torso, is quite possible with that of an Irken, as the only organs in their midsection are their spine and their squeedlyspooch, a form of super-organ resembling a human stomach.

It's possible that Red and Purple are the first co-rulers of Irk, being that Miyuki and Spork were going to appear as lone rulers. Also, it's likely that Red was going to be sole ruler but, because Purple was the same height, they were made partners. This explains why Red is much more competent than Purple.

Almighty Tallest Red: So, you're saying the humans are dumb yet... tall? How is that even possible! How can anything tall be dumb?!

Almighty Tallest Red (to Zim) : No Invader has ever been so... very small. You're very small, Zim. You're a tiny thing.

Almighty Tallest Red (to audience) It's only a matter of time before all the races of the universe serve... the Irken Empire!!!

The following table displays every known tallest in the order they have ruled.

Community content is available under CC-BY-SA unless otherwise noted.
Advertisement